The Trap of Getting Free

Wherever you go, there you are.

What is the most common phrase used in Hollywood movies? Several decades ago researchers combed through hundreds of scripts to tabulate an answer to the question. They found the most popular phrase was “Let’s get outta here!”

Doesn’t that sound American? Wanting to be where we’re not? It was the pioneer solution to difficulty: “Let’s move West. Let’s get outta here.” Today we see this in the politics of saying “no:” no taxes; no incumbents; less government; “I don’t like him/her,” etc.

The phrase intimates that we can escape oppressive conditions if we just get outta here. It whispers the promise of freedom elsewhere. Yet the attitude itself can become a trap. Paradoxically, believing spiritual freedom is somewhere other than where we are makes freedom more elusive.

An episode in the original Star Trek television series allegorized this predicament. The series featured Captain Kirk, a human, and Mr. Spock, his science officer who was half human and half Vulcan. Vulcans were devoted to logic. They used mental discipline to augment intellect and suppress emotions.

One episode opened with the discovery of a new planet near a distant star. The planet was covered with buildings, roads, and advanced technologies. But the inhabitants were missing for no apparent reason.

Kirk and Spock went down to the planet’s surface to see if they could solve this riddle. As they explored, they inadvertently triggered an alien mechanism that surrounded them with a force field. When they relaxed, the field grew weak and transparent. If they pushed against it, it got a little stronger. If they threw themselves against it, it became dense and powerful. The more they fought it, the stronger it got.

Finally they realized their prison was only as strong as their effort to be free of it. If they just saw that they were free, they could walk out of the field without effort. If they had any doubt – even a flicker of concern – that was enough to power the force field and keep them trapped.

Kirk couldn’t get out. He intellectually understood that they were free. But he still desired to get away from the alien apparatus. He thought he would be a little freer “over there.” That hedging was enough to keep him trapped. Spock, with his greater intellectual discipline, could see that they were free and harbored no doubts. He simply walked through the field.

This is a wonderful allegory for our situation. We are free, we are enlightened, we are awakened … use whatever metaphor you like. The only place we can experience this well-being is in the moment, since the present is the only place we actually experience anything. But if we think we would be freer, happier or more peaceful in a future moment after doing some more “spiritual growth,” then we feel less free, happy, or peaceful in this moment. We are trying to get outta here — or “get outta now.” We feel bound relative to what we think we could be. Like Kirk, we are trapped by the belief that we are trapped.

Woody Allen once said, “I don’t believe in heaven, but I’m going to take a change of underwear just in case.” We say, “Ah yes, I know I’m a Buddha, but I need to change myself a little just in case.”

Since we equivocate, we need help. We don’t need help changing anything that’s real. Reality is not the problem. But we do need help in seeing reality more clearly. That is why meditation is so important.

Our educational system at its best teaches us to think clearly. But it does little to help us see what’s really here before we decide what to do about it.

This Star Trek allegory illustrates the paradox of the spiritual path. The path seems to take us somewhere. But as Buckaroo Banzai put it, “Wherever you go, there you are.” The one thing we can never escape is our mind. We take it with us. “Wherever we go, there it is.”

All this shows up in our meditation practice sooner or later.

During a dhamma talk, a long-time practitioner, Laura Rosenthal, said she had to keep re-learning “the only mind I get to practice with is this mind, not someone else’s better mind.” On a recent retreat she had an “aha” moment: “Whose mind did I think I was practicing with anyway?”

We all laughed. She had articulated a dynamic that hovered quietly in the shadows of our minds as well. We too often prefer a mind-heart different than the one we have. If we see that wish clearly, we can smile at its naiveté. 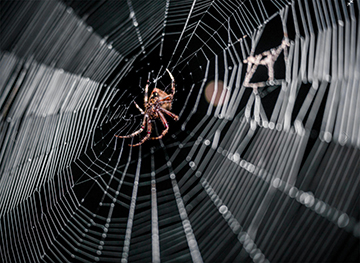 Reality is what it is. We cannot escape it. Wherever we go, there it is. Reality has no opinion about what it should or shouldn’t be. It is not anthropomorphic. It simply is what it is.

Paradoxically, within the bounds of reality, we are already completely free. We feel trapped when we pay more attention to our opinions about what reality should be than to what reality really is.

When we feel trapped, it is as if we are imprisoned in a house. There are at least three ways we can approach that feeling. The first is to work with the emotions themselves: the anxiousness, anger, worry, despair, and so forth and see if we can soothe them. It’s like moving the furniture around in the house. We make it more comfortable but remain confined. It helps a little.

Another approach is to look for a door or window to get out. This seems more promising. But unless we truly understand the nature of the house we are caught in, running out the door or jumping out the window leaves us, bewilderingly, in another house.

A third approach is to just see the nature of the house that confines us. The Buddha discovered that if we can just see clearly, the house is seen for what it is — a delusion. We are already free. Like Spock, we can just walk away. And wherever we go, there we are: free.

These three approaches are not mutually exclusive. But without the last approach, we will remain less than completely free.

Stephen Levine once said that most people approach meditation making a bargain: we’ll put up with the time and effort if we get some peace and clarity in return. It’s like a monetary exchange. We want something for something.

But real freedom comes only with dispassion. Dispassion means we’re more interested in what’s going on than in our opinions about it. We aren’t meditating to get anything. We are content with whatever arises.

Then we are free.

1. Buckaroo Banzai is a fictitious character in the 1984 film The Adventures of Buckaroo Banzai Across the 8th Dimension, written by Earl MacRauch. Jon Kabat-Zinn used the phrase as the title of his 1994 book published by Hyperion Books.

This document is licensed under a Creative Commons Attribution-NonCommercial 4.0 International License. You are welcome to use all or part of it for non-commercial purposes as long as you credit the author. Specific licensing details are here.
How to cite this document (a suggested style): "The Trap of Getting Free" by Doug Kraft, www.dougkraft.com/?p=TrapOfGettingFree.