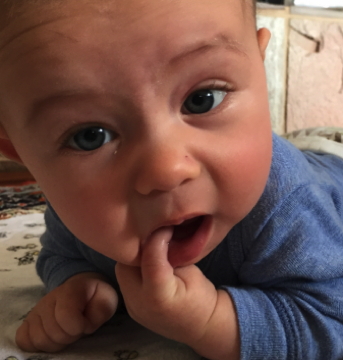 He’s teething. So it wasn’t a surprise that our grandson, was fussier than usual during our last visit. What continues to surprise me is how fluid his emotions are. One minute he’s grinning ear to ear. The next minute his face crumbles into misery as he pokes his soar gums. The next he both pouts and smiles as he looks at me over his wet hand. I am charmed.

I see in him no sign of an ego or sense of self that is so ubiquitous in us adults. While he has memory, I see no sign of reminiscing or anticipating. He lives utterly in the moment.

The ability to live in the present is a sign of spiritual freedom. But I see no sign of freedom either. If anything, he is trapped by sensations: his well-being is bounced around by the feeling in his tummy, his gums, his state of rest, the state of his diaper, and the sights and sounds around him.

He is a relatively happy baby, thanks to his parents and his disposition. But inner freedom requires more than presence. As the Burmese meditation master Sayadaw U Tejaniya puts it, “Mindfulness alone is not enough.” Freedom requires wisdom. And wisdom requires understanding how the mind-heart works and how the mind itself is an ever-changing illusion. 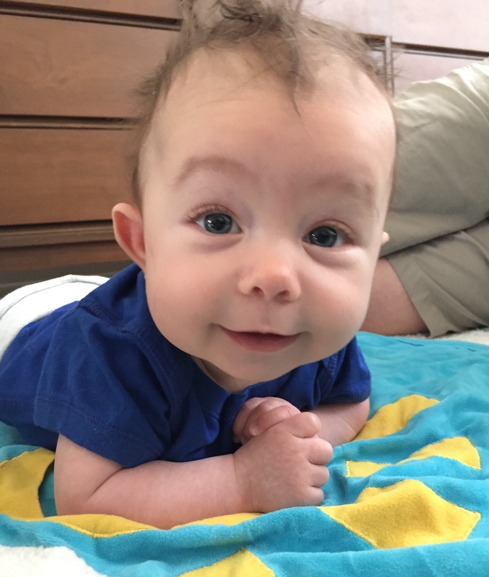 Before he can develop wisdom and selflessness, Henry needs a few more building blocks – object constancy, cause and effect, empathy, objectivity, deductive reasoning, collectedness, and so forth.

It’s for emotionally mature adults to get over a sense of self. As Jack Engler wrote thirty years ago, “You have to be somebody before you can be nobody.” Henry has to have a healthy sense of self before he can get rid of it.

He’s only four months old. And I’m delighted to watch him unfold at his own pace. Such as sweet mystery.